Yesterday the government announced changes to the way that Opal card trips and journeys are calculated in order to crack down on ‘Opal runners’.

Minister for Transport and Infrastructure Andrew Constance today announced the Opal ticketing system has been updated to stop the practice of ‘Opal running’, closing a loophole that potentially costs taxpayers millions of dollars each year.

Currently, some people are running, cycling, driving or even roller-skating between train stations or light rail stops to tap on and off, earning free travel for the week after only paying around $18.00.

“It’s unfair that customers doing the right thing and paying to actually use transport are being cheated by people who are using their own or other people’s cards to artificially inflate their journeys. Some are even using the practice as a business model to earn money,” Mr Constance said.

Below is a sample snapshot of typical short trips taken between light rail stops and train stations to artificially reach the Opal reward of free trips, during February 1 and March 6, 2016. The table demonstrates the prevalence on Mondays and Tuesday of Opal running.

The Opal system currently allows people to walk, run or cycle between stations that are close together, like Macdonaldtown and Erskineville, and accumulate free travel rewards in approximately an hour and a half – without even catching a train or tram. The changes implemented today mean the same process could take at least five hours.

“From today, the system will be updated to substantially disrupt those people who are improperly earning free travel, by raising the number of transfers needed to make a journey,” Mr Constance said.

“My message is that the changes are in operation as of now – so ‘Opal runners’ don’t have to bother. It’s not worth running out of steam.

“The system changes do not affect other customers because they are not the ones attempting to quickly get charged for more journeys, especially when transferring between light rail stops or train stations while travelling on the same journey.

END_OF_DOCUMENT_TOKEN_TO_BE_REPLACED 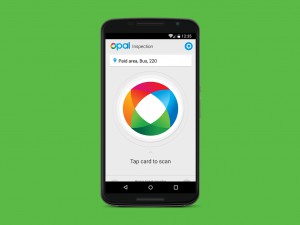 Great to see that Transport for NSW’s Transport Officers get to use such a beautifully designed app to make their jobs easier – the ability to quickly check the status of an Opal card from the one smartphone device they’re already carrying for work.

The Opal card uses near field communication (NFC) technology that allows users to tap on and off at card readers across the Opal public transport network. ORPA takes advantage of this same type of technology, which is available on Android smartphones, to read the data on Opal cards. The app checks free read data as well as encrypted content stored on the card, and replaces the existing, single function, read-only portable readers that Transport Officers used to carry.

ORPA is a great example of how mobile technology creates great opportunities for organisations to streamline their operations while also building in flexibility for changes in the future.

(seems the previous dedicated Central Station refresh update from a few weeks before has disappeared, and replaced with the below;)

Town Hall and Central stations are currently undergoing a refresh with new tiling and glazing, fresh paint and other upgrades taking place around the concourse level.

The refresh work will take place overnight and during weekend trackwork over the coming months to avoid busy peak periods and reduce impact on customers.

The work is expected to be completed by mid-2015, with the modernised and  streamlined look to be more appealing and user-friendly for customers.

Work areas may have a temporary impact on station access and facilities, so please see station staff if you need assistance.
Th

We appreciate your patience and understanding while this important work is completed.

A media report today claiming that there is a $20 million revenue shortfall on State Transit buses because of Opal is completely false and misleading.

Over the last 12 months, revenue for STA buses has met expectations, with numbers comparable to recent years.

The claim published today uses incomparable data to make assertions which are consequently false and misleading.

Transport for NSW has always structured Opal fares and benefits such as free trips into its revenue projections. These reward free trips are an incentive to use public transport more, and this is proven by the increased use of public transport on weekends and on trains in the CBD.

The claim that earlier this month transport authorities were forced to install new software to fix Opal is false and misleading. Software upgrades are normal and standard activities on every electronic system. 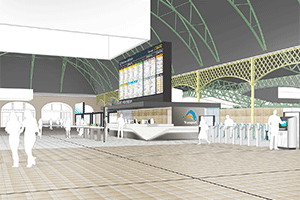 An upgrade is currently underway to transform the current information kiosk in the Grand Concourse at Central Station into a more dynamic, efficient and customer accessible area – the Transport Customer Service Centre.

This new centre will offer:

Other improvements will be made to Central Grand Concourse, these include:

The planned completion and opening date of the new customer service centre is late June 2015.